Visitors to a wet Donington Park earlier in the year were treated to an eventful start to the 2015 GAZ Shocks BMW 318 Compact Cup Championship; with an over-capacity field providing bumper to bumper action over three races, it set the tone for several more hotly contested events during the year ahead. 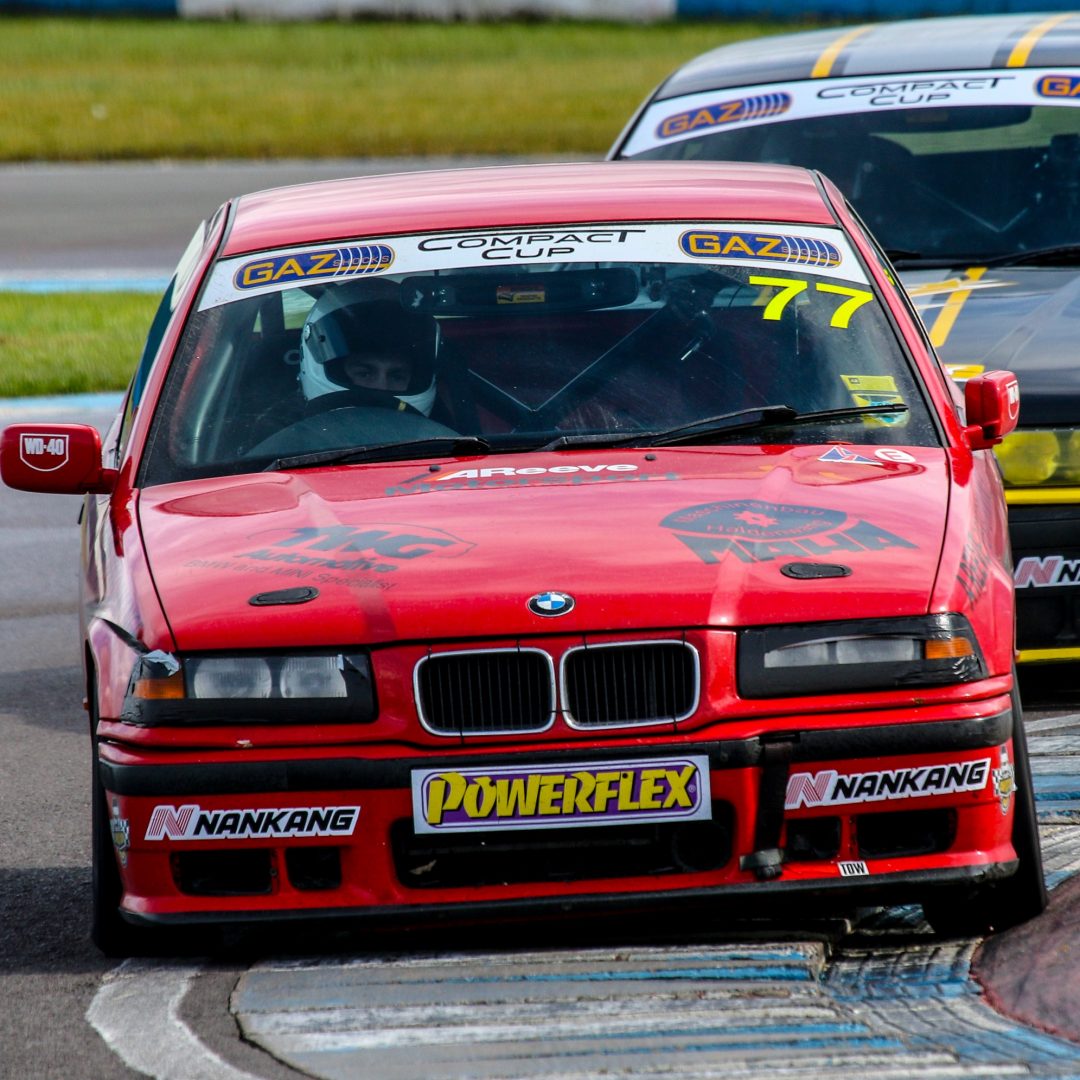 Reformatted due to the number of entries, the inaugural Donington race saw two victories for former champion Steve Roberts but it was Owen Hunter who gained the plaudits with his maiden victory in the championship. Klarius is a well-established sponsor for the series, providing top quality exhausts to support competitors.

Forty-three BMW’s took to the circuit for qualifying – the competitive standard for the season being set early on. The top six drivers were only separated by a single second at end of the 15 minute session. The pace was set by Ex-British GT champion James Gornall, posting a 1:43.8. All ingredients pointed to an enthralling initiation to the 2015 season. After qualifying, each race combined 2 out of 3 groups, each designated from A to C.

Race one (Groups B and C) was dominated by Steve Roberts, leading from the start to register an impressive victory. However it was not all plain sailing for the former champ, as Mike Tovey in 2nd turned the screws applying pressure all the way to the chequered flag. The battle for third saw newcomer Ian Jones in the ascendancy early on after making a brisk start. However it was not to last – as on lap three Josh Harvey stormed around the outside at Redgate to take race position. This was all the more impressive considering Harvey was conducting damage limitation due to a deformed wheel throughout the race. All in all a hugely impressive 3rd place finish.

Race two (C and A) saw James Gornall undo most of his good work in qualifying as he fell prey to the Craner Curves on a damp opening lap, leaving him to doggedly battle through the field to finish 8th. The lead fell to Ex-MR2 champion Paul Hinson early on, but pressure from David Drinkwater who had climbed 4 places from the start grid began to tell. The battle matured on lap 3 as Drinkwater slipped past, only for Hinson to repay the favour on lap 6. The repost however was short lived, as Hinson slipped to 4th behind Drinkwater, Owen Hunter and Alex Dew in the following laps. What ensued was a three way fight for the lead as the race reached its climax. Keeping his cool, Hunter stuck his BMW past Drinkwater on the penultimate lap, the on looking crowds appreciating the fluctuating pack. Hunter kept his head down on the final lap to record his first victory in the series – a well-deserved achievement after a perfectly paced performance. Drinkwater and Dew took second and third respectively completing the podium.

The day’s final race (A and B) saw Steve Roberts gain his second win of the day. After being beaten off the line James Gornall applied considerable pressure via Robert’s rear bumper for the entirety of the race. Gornall was undone as Roberts made his car big for the entirety of the race – drawing on his prior experience driving in Formula Ford and the Compact Cup. Owen Hunter added another podium to a successful day by doing the double over David Drinkwater – evoking the spirit of his earlier victory on lap 9 as he claimed a hard earned 3rd.

Owen Hunter was awarded a deserved Driver Of The Day Award, after a spirited performance that summed up the effort he and his father invest in their car.

The 2015 GAZ Shocks Compact Cup Championship with its over-capacity field, evenly matched drivers and high intensity racing promises to be as frantic and changeable as ever. With Steve Roberts looking to reclaim his 2013 crown but facing huge pressure from James Gornall, Owen Hunter and company; it promises to be a season full of twists and turns.

Support from manufacturers like Klarius greatly help in the support of all tiers of motorsport – helping to perpetuate a healthy tradition of hotly contested motor racing. Top quality emissions products are a must for road and race cars alike – so Klarius transmits the knowledge learned from series such as these to the road. Furthermore, Klarius’ large range ensures that older cars and classics are properly supported, allowing us all to enjoy the rich automotive culture and history fostered in this country.

The battle for the championship continued at Brands Hatch in April, Croft in May and will then move to Oulton Park in July, followed by Silverstone, Snetterton and back to Donington in October to round off the season, with races being broadcast subsequently on Motors TV.