Most road vehicle engines require a degree of back pressure in the exhaust system, including the manifold and exhaust pipe components, in order to run efficiently. Back pressure is controlled by the design of the entire exhaust system – including diameter, shape and length of the exhaust and any baffles present in the muffler. Get it wrong and an engine will have reduced power, use more fuel and generally require servicing more often. So how to get it right? Detailed design and testing is the answer… 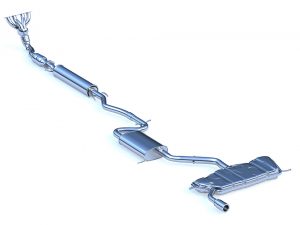 Klarius Products manufactures over 2 million exhaust systems every year in the UK, head of R&D Doug Bentley explains everything you need to know about back pressure.

“Aftermarket sports exhausts are usually the first place we turn to for an example of how to get things right and wrong, they vary from titanium works of art through to generic universal big bore mufflers. They are usually tuned for more volume, which is usually thanks to fewer sound deadening materials and baffles in the silencer boxes. If the pipe is the wrong diameter though the system, a ‘freer breathing’ low-end exhaust system can actually reduce power.

We make the race series exhaust systems for a range of competition cars based on road cars, the Mazda MX5 series and the BMW compact cup / 330 Challenge are obvious examples. The balance we have to strike there is to make sure the cars pass track noise regulations, and emissions tests, as well as maximising engine power, particularly at higher revs as needed during racing events.

Customers are often surprised to find that the exhaust pipe they see at the back of the car is only slightly wider than the road car, and if you remove the cosmetic tips and heat shields, then it can look smaller. There is a reason for this; an engine is designed for a specific flow of gas through the piston chambers, valves and exhaust system. The engine tune relies on some degree of back pressure to push against in order to balance the gas pressure in the engine and maximise power and torque.

Take a drinks straw as an example, if you blow through a small straw with a small diameter the pressure in your cheeks rises and becomes uncomfortable, choose a wide straw and the pressure reduces, blow out of your mouth and there is no pressure at all, just atmospheric pressure and you soon run out of puff. If you remove the exhaust from an engine entirely it will run very badly, misfire and produce less power, conversely if you put too many restrictions into an exhaust system the engine will labour unnecessarily, getting pressure right – is important.

This is an extreme example, but it illustrates the principle. The same applies for turbo charged and normally aspirated engines, the only difference being there is a pressure drop across the turbo which has to be compensated for. The pressure maintained in the exhaust manifold in a turbocharged engine is a higher than that in the rest of the exhaust system.

If an exhaust system fitted to a road car breaks or corrodes and the familiar blowing noise appears then it will also reduce its power and start using a lot more fuel. Many modern engines rely on ECU calibration and use sensors attached to the exhaust system to check exhaust gas temperature and content of exhaust gas, i.e. is the engine running lean or rich, which will have an impact on emissions too. In these cases the ECU might put the car into limp home mode, or in extreme cases shut the car down entirely.

The issue with a break or a hole caused by mechanical damage or corrosion is that it will change the back pressure in the exhaust system, reducing it. We have seen some cheap aftermarket exhausts that already have the incorrect back pressure and have disastrous effects on engine performance, efficiency, emissions and engine wear. Klarius puts every single exhaust design through a Type-Approval process, this means the official independent government body (the VCA) that sets and polices product performance standards, tests our products and issues a certificate of conformity, which is a guarantee that each product either matches or exceeds the performance of the original.

Our full Type-Approval policy incurs us more R&D costs, but we produce such a large number of exhausts, the cost is amortised over a large run and the consumer gets a guaranteed quality item that costs virtually the same as a non-type approved one. This also applies to catalytic converters (CATs) and Diesel Particulate Filters (DPFs) which form an essential part of all new exhaust systems, in that we fully Type-Approve our products in line with EU Regulations.

Both CATs and DPFs can create back pressure, the CATs we employ on the race systems for example have a lower cell density within the monolith, (often referred to as 200 cell units) they are designed to minimise back pressure at high engine speeds, but are more expensive because they are made in lower volumes than standard units.

At normal engine speed ranges however a standard CAT is more effective. The CAT is a ‘flow through’ device, so gas passes through it and reacts with precious metal on the surface of the ceramic or metallic monolith, which makes exhaust gas emissions less harmful. Providing it is the right size for the engine capacity, it won’t affect back pressure at anything but very high engine speeds.

DPFs are actually filters, so exhaust gas has to pass through the ceramic core material, this means they are generally larger than CATs and in some cases have CATs built-in to them or as part of the same monolith design. The important thing is that the ceramic monolith has to be the right size and cell density, or there is an increase in resistance to gas flow, which increases back pressure.

DPFs in cars that are only driven short distances tend to clog up because the cleaning routine (Regeneration), which is a controlled burn of collected soot, into ash, doesn’t happen. A blocked DPF increases back pressure hugely and will lead to an ECU taking action or eventually the car stalling. Some drivers have removed the DPF to avoid this issue, but apart from being illegal and very bad for the environment, it will also alter the back pressure in the exhaust and lead to increased fuel usage, most likely a drop in power and eventually engine problems.

Balancing back pressure is essential then for race engines and road vehicle engines alike. Taking time at the design and testing stages, allows us to ensure we make products that not only comply with EU legislation, but also perform comparably to the original unit. A Type Approved replacement Exhaust, CAT or DPF item for a road car or light commercial vehicle will maintain the correct, balanced, back pressure of the original at normal engine speeds. This will then ensure engine efficiency, engine power and emissions levels are all maintained, it will also look after the engine from a wear point of view and prevent warning dash lights appearing and vehicles being stopped or ordered to limp home by the ECU.

To watch a video on exhaust technology, click here.