Since its introduction in 2001, the Diesel Particulate Filter (DPF) has been the subject of controversy. A vital component for ensuring the emissions compliance of diesel vehicles, the DPF plays an important role in processing the harmful soot particles that are produced by the combustion process. As of February 2014, the MOT test now includes a DPF check for diesel vehicles if the component was fitted from new. So why are some motorists and garages illegally removing DPFs from vehicles? 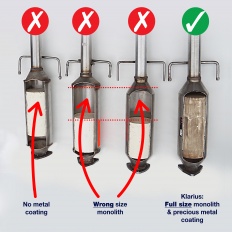 DPFs are a filter device, constructed of a metal casing containing an internal ceramic monolith. The device captures soot particles from the exhaust gas stream inside the monolith. Once the soot contained in the ceramic monolith reaches a level where it starts to reduce the gas-flow, it triggers a regeneration cycle.

The re-gen cycle is effectively a controlled burn-off that happens inside the DPF where soot is burnt through to form less harmful gas and fine ash which remains in the DPF. A process akin to BBQ charcoal being burnt. The process is called regeneration, and allows the device to empty itself of the soot contained within. Typically this process will only occur on longer journeys when the DPF reaches a high temperature for a prolonged period, for example on the motorway.

Many owners of diesel vehicles who only make short journeys will notice that the DPF fills quickly and does not regenerate. The exhaust system cannot reach a suitable temperature on these journeys, so the soot is given no opportunity to reduce, and so clogs the monolith. Which means a dash warning light comes on, usually denoting an ‘emissions’ issue, quickly followed by limp-home mode, or indeed a full engine shut-down.

The instinctive thing to do with a warning light on is to drive slowly – ironically this will only make the situation worse; what the engine needs is to get hot, either via driving with high revs, or at higher speeds for 20mins or so. Both of which will increase the temperature in the DPF to the point where re-generation process can be triggered.

Some motorists will assume that it’s the component that is faulty, and may opt to remove the DPF entirely as clogging continually reoccurs. This is illegal and will actually start to damage the car as well as adding highly carcinogenic pollutants into the atmosphere.

The situation can be avoided by simply taking the vehicle on a long journey once a month, providing an opportunity for the DPF to burn off the excess soot. However, this knowledge is often not relayed to may diesel owners, which has helped to create a black market specialising in DPF removal.

However, it is now a legal requirement for a DPF to be present on a road going vehicle if it was fitted from new. This is now part of the current MOT test, where the absence of a DPF on an applicable diesel vehicle will result in an automatic failure. This can lead to costly repairs for the owner to make the vehicle roadworthy again, coupled with the inconvenience caused by the time taken to complete the work.

DPFs used correctly can still be a service item; during normal use for some vehicles it will eventually become full of ash, which again usually triggers the engine management light on the dashboard. The performance of the vehicle will also noticeably deteriorate as the exhaust gas stream is hindered. This will usually result in a full DPF replacement.

When and if this happens depends on the rate at which a DPF becomes blocked – this can be affected by the driving habits of the vehicle owner – how clean the engine is when it burns fuel and also how it is driven. Small cars with ‘dirty’ engines will last 60-80,000 miles before a replacement is required. Vehicles mostly used on the motorway may last 150,000 miles plus, or, the lifetime of the vehicle.

The cause of the DPF is not helped by inferior DPF replacements making it on to the market. At Klarius, we type-approve our aftermarket DPFs, the EU standard for emissions and product quality, meaning it will be comparable to the original in terms of performance. We also test fit our DPFs in-house to vehicles of correct marque, model and year to ensure the component is quick and easy to fit, as well as attaining OE levels of performance and efficiency.

Klarius has seen independent test results that clearly show some suppliers are not so stringent. The main area of compromise is the size of the internal ceramic monolith, which in some inferior replacements, can be half the size it should be in order to match the OE equivalent. This of course means the DPF clogs much quicker when installed, causing an increased likelihood of failure and providing another excuse for complete removal. Some DPFs are also designed with a precious metal coating on the ceramic monolith, which acts as a catalytic converter for further reducing emissions, this is often very light, or absent on cheap replacements.

The importance of being well informed about DPFs and utilising good driving practise, combined with correct purchasing decisions is clear. Diesel vehicles that require DPFs that are caught on the roads without one can expect fines of up to £1,000 for a car and £2,500 for a commercial vehicle. Its absence (even if the internals have been removed and the case left in place) will be obvious to most road users due to the increased levels of black smoke exiting the exhaust.

The good news is that, by specifying a quality type-approved replacement and taking a vehicle on periodic long journeys, additional replacements can be avoided. A quality DPF will function effectively with minimal servicing requirements. Rather than taking the risk of fines and the inconvenience of a vehicle being removed from the road, spending a bit extra on a quality aftermarket replacement is more environmentally sensitive and less risky than the alternative of removal.

For more information contact Klarius to take part in one of the company’s regular IMI accredited training courses click here, or watch the latest training videos on the company website here.